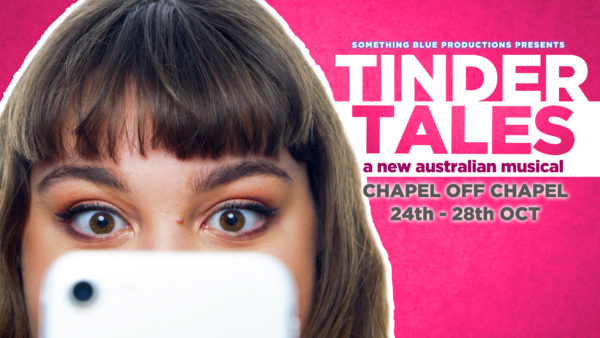 Do you believe in love at first swipe?

Fresh from it’s sold out premier season at the 2018 Melbourne International Comedy Festival, Tinder Tales – A New Australian Musical is a show for anyone who has puked on a first date, spent an hour constructing a five-word text, or gone on a late-night tinder-binge.
Written by Mattie Mcleod and Thomas Bradford, ‘Tinder Tales’ tells the story of Abby, a hopeless romantic so stuck in her own head that she can’t simply date someone. When Abby meets a guy who she thinks is ‘The One’, we not only see the effect their blossoming relationship has on her self-esteem, but also the affect her self-esteem has on her relationship. This raunchy original show delights in satirizing both romantic comedies and online dating, even as it succumbs to all their worst tropes. Through the lense of digital dating, the show explores anxiety, sexuality, love and mental health in a modern age.

With direction by Clary Riven, choreography by Kirra Sibel and musical direction by Thomas Bradford, ‘Tinder Tales – A New Australian Musical’ is proudly presented by Something Blue Productions.

What the critics are saying…

“The audience was constantly in stitches” – Weekend Notes
“Laughs of recognition rose in waves from the crowd…” – Squirrel Comedy
“Perhaps the loudest applause should go to the creators of this show….Tinder Tales is a stroke of musical comedy brilliance.” – Theatre Press