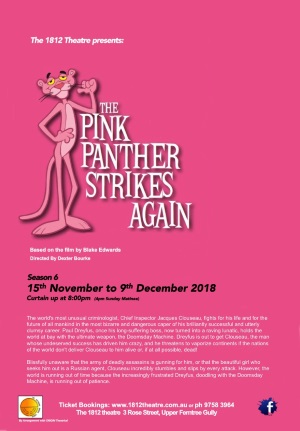 An event every week that begins at 8:00 pm on Wednesday, Thursday, Friday and Saturday, repeating until December 8, 2018

The world’s most unusual criminologist, Chief Inspector Jacques Clouseau, fights for his life and for the future of all mankind in the most bizarre and dangerous caper of his brilliantly successful and utterly clumsy career. Paul Dreyfus, once his long-suffering boss, now turned into a raving lunatic, holds the world at bay with the ultimate weapon, the Doomsday Machine. Dreyfus is out to get Clouseau, the man whose undeserved success has driven him crazy, and he threatens to vaporize continents if the nations of the world don’t deliver Clouseau to him alive or, if at all possible, dead!

Blissfully unaware that the army of deadly assassins is gunning for him, or that the beautiful girl who seeks him out is a Russian agent, Clouseau incredibly stumbles and slips by every attack. However, the world is running out of time because the increasingly frustrated Dreyfus, doodling with the Doomsday Machine, is running out of patience.