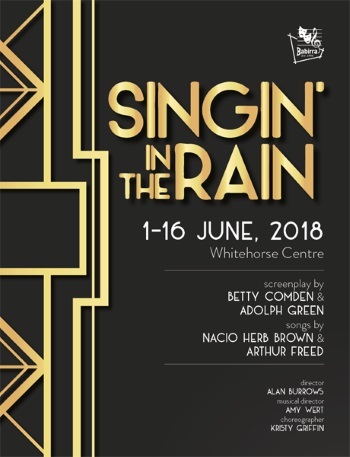 Singin’ In The Rain

An event every week that begins at 8:00 pm on Thursday, Friday and Saturday, repeating until June 15, 2018

Singin’ In The Rain takes us back to the era of silent movies – in fact the end of that era, when talking movies were just beginning. While Lina Lamont was a star in the silent versions, her less-than-dulcet tones make her quite unsuitable for this new-fangled craze. The interplay between her, leading man Don Lockwood and new star Kathy Selden form the basis of this ever-popular story.

The 1952 movie, starring Gene Kelly, Debbie Reynolds and Donald O’Connor is widely regarded as the best movie musical ever made. The equally as popular stage version has been faithfully and lovingly adapted, the original London production, directed by and starring Tommy Steele, running for two-and-a-half years from June 1983. Featuring hilarious comedy routines, some of the best tap-dancing numbers you are likely to see, and many great songs such as You Are My Lucky Star, Good Morning, Moses Supposes, Make ‘Em Laugh, and of course the wonderful title song, complete with rain tumbling down on a blissfully happy Don Lockwood, Singin’ In The Rain is 24-carat classic entertainment.