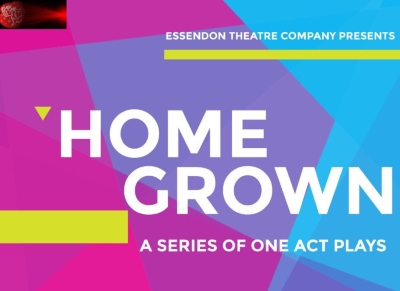 Homegrown – A Series of One Act Plays

An event every week that begins at 8:00 pm on Thursday, Friday and Saturday, repeating until June 29, 2019

Gordon is a practicing psychotherapist who lives a privileged but indulged lifestyle where money is the main concern. He loathes his job and refuses to admit it. The client from hell arrives and upends all the certainties in his life and makes him realise that unless he changes he could lose the things he cares most about.

During the mid – to-late 1950’s, post war Melbourne was in the grip of a massive shortage of public housing. Vast tracts of land were given over to the Housing Commission to help alleviate the problem and to place hundreds of inner City slum dwellers as the city was “cleaned up” prior to the 1956 Olympic Games. Waiting lists were long and selective. Tenancy was prized, but not guaranteed. This is the story of two young mothers’ efforts to challenge and expose corruption in their world, at their risk, finding courage they didn’t think they had.

Play 3 – My refrigerator is an alien spaceship

When Jessica Windsor becomes the most despised actor in Hollywood, she hides out at a secret apartment. With the media and paparazzi on her trail, she gets “help” from her bumbling Agent Mike, and her conniving Mother.  Could she be in any more trouble? Well, yes, it seems she could be with the small matter of the Extra-Terrestrial hiding out with her!  Is it all over for Jessica? Or will the truth she protects blow Hollywood apart? A fast paced comedy featuring real humans and puppets!