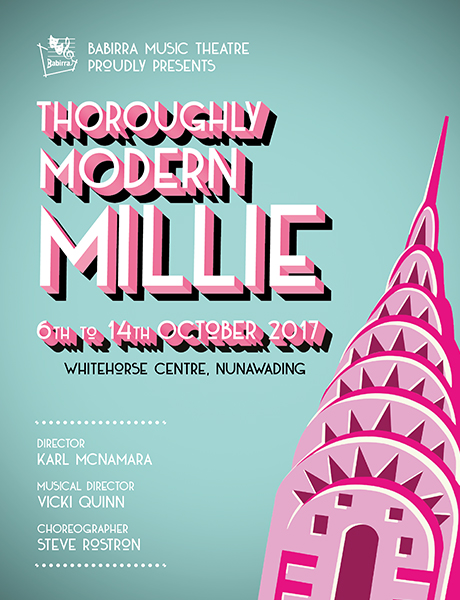 An event every week that begins at 9:00 pm on Thursday, Friday and Saturday, repeating until October 14, 2017

An event every week that begins at 2:00 pm on Sunday and Saturday, repeating until October 14, 2017

It’s 1922 and young Millie Dillmount has come to New York City from Kansas, in search of a new life for herself. Her grand plan is to find a job as a secretary for a wealthy man and then marry him. However, the best laid plans…… The owner of her dingy hotel kidnaps young girls to sell to the Far East, her wealthy boss is slow in proposing marriage, and the man she actually falls in love with doesn’t have a dime to his name… or so he tells her.

The winner of six Tony Awards, including Best Musical, Thoroughly Modern Millie was the 2002 season’s most awarded new show on Broadway. Based on the 1967 Academy Award-winning film starring Julie Andrews, Thoroughly Modern Millie takes you back to the height of the Jazz Age in New York City, when “moderns” were bobbing their hair, raising their hemlines, entering the workforce and rewriting the rules of love.