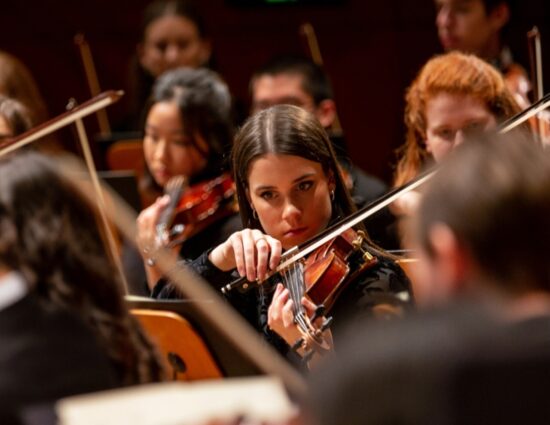 The University of Melbourne Live at Sidney Myer Music Bowl

Join us for a free series of open-air concerts by the leading large ensembles from the Melbourne Conservatorium of Music.

These performances showcase the next generation of young Australian musicians in full flight, with programs combining world premieres and familiar favourites, each led by outstanding international conductors.

The University of Melbourne Symphony Orchestra

The University of Melbourne Symphony Orchestra, led by world-renowned conductor Associate Professor Richard Davis and featuring our very best student classical musicians, is the premier orchestral ensemble at the University.

This concert represents a triumphant return to live performance from the ensemble, in the stunning surrounds of the Sidney Myer Music Bowl, and features a program of works including well-known favourites such as Ravel’s Bolero and Mussorgsky’s Night on a Bare Mountain, as well as Attic Tragedy, composed by the Melbourne Conservatorium of Music’s Melody Eötvös.

The University of Melbourne Wind Symphony

The University of Melbourne Wind Symphony is led by one of Australia’s newest international conductors, Dr Nicholas Enrico Williams, who joined the Melbourne Conservatorium of Music as Associate Professor after sixteen years at the University of North Texas, one of the most significant academic institutions for wind band activity in the world.

Highlights from our Wind Symphony’s program include the world premiere of Heroes in the Shadows, composed by Jeannie Murrow and dedicated to COVID-19 first responders, as well as Australian premieres of pieces by Higdon and Runstead. These are accompanied by works by Grainger, Gorb and Persichetti, making for a dynamic and stirring evening of wind music.