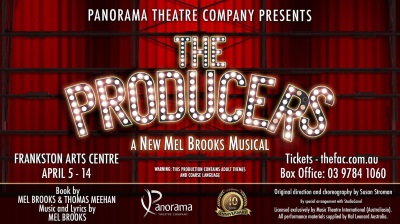 An event every week that begins at 7:30 pm on Friday and Saturday, repeating until April 13, 2019

Panorama Theatre Company is proud to present its 40th Anniversary production of the Mel Brooks musical comedy THE PRODUCERS, one of the most outrageously offensive and politically incorrect pieces of theatre to ever hit the Frankston Arts Centre stage! Also adapted into the popular film with Nathan Lane & Matthew Broderick in 2005, this modern classic will leave the audience gawking in amazement and choking with laughter as the best—and worst—of the 1950s world of Broadway is presented in such a sidesplitting fashion.

The curtain rises on a washed up Broadway producer, Max Bialystock and his feeble accountant, Leo Bloom. Together, the pair orchestrate an extravagant scheme to swindle dozens of sex-crazed little old ladies out of their millions to produce a surefire Broadway flop that’s guaranteed to close on opening night! After stumbling on the most offensive script possible, “Springtime For Hitler”, hiring the most camp director in New York and filling the stage with the worst actors on Broadway… What could possibly go right?

Featuring toe-tapping numbers such as ‘I Wanna Be A Producer’, ‘We Can Do It’ and ‘Along Came Bialy’, this surefire Frankston hit is loaded with all the inappropriate things you wish you could get away with and more, throwing political correctness out the door. With a stellar cast—who we cannot name yet as their lawyers are still reading the script—and a 20-piece orchestra, we’re surprised you’re still reading this and haven’t booked your tickets yet!

Warnings: Some coarse language and politically incorrect themes that may offend