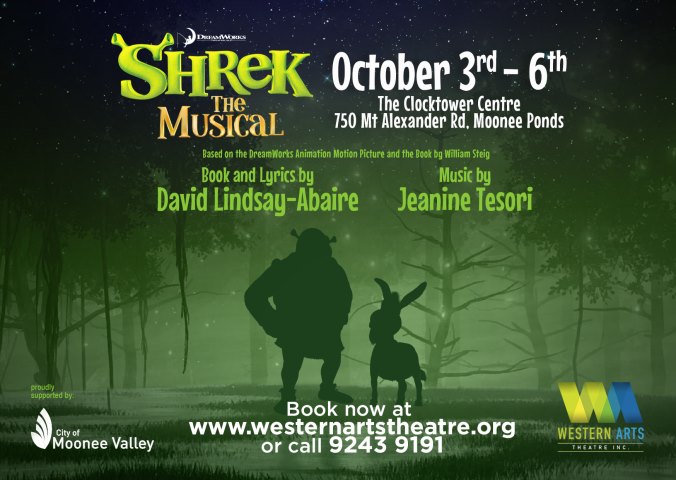 An event every week that begins at 8:00 pm on Thursday, Friday and Saturday, repeating until October 6, 2018

Based on the Oscar-winning DreamWorks animation film, Shrek the Musical is a Tony Award-winning fairy tale adventure, featuring new songs from Jeanine Tesori and a side-splitting book by David Lindsay-Abaire.

Shrek brings all the beloved characters from the film to life on stage and proves there’s more to the story than meets the ears.

“Once upon a time, there was a little ogre named Shrek…” begins the tale of the unlikely hero who finds himself on a life-changing journey alongside a wisecracking donkey and a feisty princess. Throw in a short-tempered bad guy, a cookie with an attitude and over two dozen other fairy tale misfits, and you’ve got the kind of mess that calls for a real hero.

Western Arts Theatre is proud to partner with Moonee Valley City Council to present this vibrant musical that promises to be fun for the whole family.

NOTE: There will be a PREVIEW show on Wednesday, 3 October at 8pm.