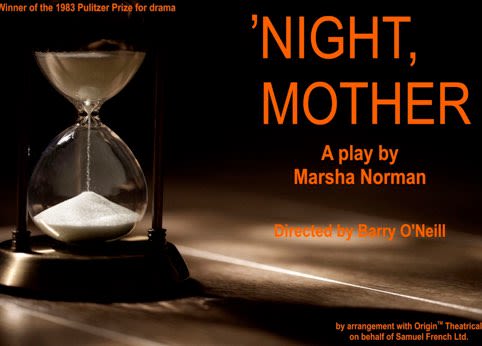 An event every week that begins at 8:00 pm on Thursday, Friday and Saturday, repeating until June 9, 2018

The scene is the living room/kitchen of a small house on a remote country road, which is shared by Thelma Cates and her daughter Jessie. Now in her mid-thirties, Jessie’s life has been stale and unrewarding.

As the play begins Jessie calmly tells her mother that she intends to kill herself that night with her father’s service revolver. At first
Thelma refuses to take her seriously but as Jessie quietly goes about tidying the house and preparing for her death, Thelma realises the depth of her daughter’s despair. Becoming increasingly desperate and helpless, Thelma uses every tactic and trick she can think of to change Jessie’s profound decision.

Emotions ebb and flow as mother and daughter exchange past grievances, struggles and misunderstandings, while time trickles down relentlessly to the play’s climax.