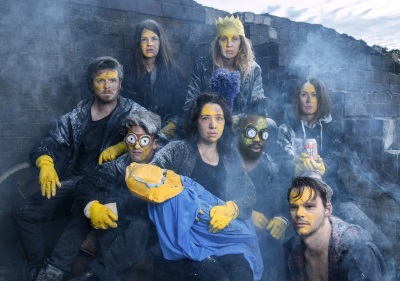 An event every week that begins at 7:30 pm on Wednesday, Thursday, Friday and Saturday, repeating until May 19, 2019

After a completely sold-out season, Lightning Jar Theatre is thrilled to announce the return of Mr. Burns, a post-electric play for those who missed out first time around.

In the aftermath of an untold apocalyptic event, a group of strangers huddle around a makeshift campfire, distracting themselves by piecing together a half-forgotten episode of their favourite show, The Simpsons. But will pop culture survive in a world without electricity?

Astonishing and disturbing in equal measure, Lightning Jar Theatre is proud to present the Melbourne premiere, directed by John Kachoyan with music direction by Andrew Patterson.

Named by The New York Times as one of the 25 best American plays since Angels in America, Anne Washburn’s darkly comic work is a compelling examination of how the stories we tell make us the people we are.

‘When was the last time you met a new play that was so smart it made your head spin? … ‘Mr. Burns, a Post-Electric Play’ has arrived to leave you dizzy with the scope and dazzle of its ideas.’– Ben Brantley, NY Times

Mr Burns is part of the 2019 VCE Drama playlist.