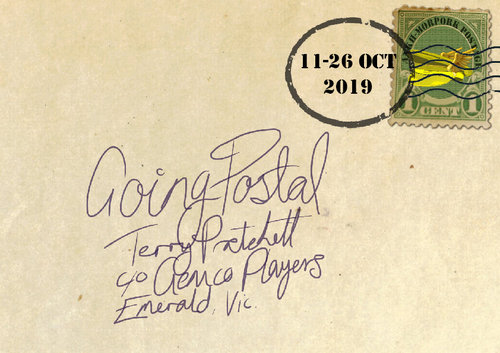 An event every week that begins at 2:00 pm on Friday and Saturday, repeating until October 26, 2019

Moist von Lipwig was a con artist, a fraud and a man faced with a life choice: be hanged, or put Ankh-Morpork’s ailing postal service back on its feet. It was a tough decision.
With the help of a golem who has been at the bottom of hole in the ground for over two hundred years, a pin fanatic and Junior Postman Groat, he’s got to see that the mail gets through. In taking on the evil chairman of the Grand Trunk Semaphore Company, and a midnight killer, he’s also got to stay alive.
Getting a date with Adora Bell Dearheart would be nice, too.
In the mad world of the mail, can a criminal succeed where honest men have failed and died? Perhaps there’s a shot at redemption for man who’s prepared to push the envelope …