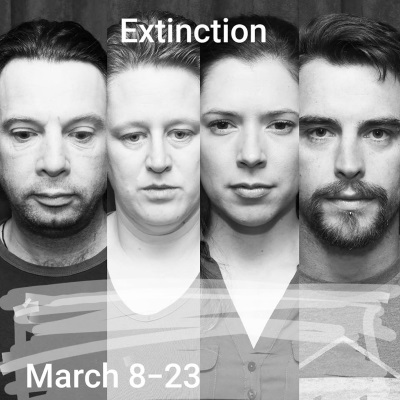 An event every week that begins at 8:00 pm on Friday and Saturday, repeating until March 23, 2019

Extinction is set on the windswept coast of southern Australia, where the dense temperate rainforest sweeps down to the blue wilderness of the Great Southern Ocean.

One wild winter night, Harry Jewell is driving along the Great Ocean Road, when he hits an animal. He stops and discovers that the creature is still alive. He picks it up and drives through the storm to a wildlife shelter, where an American zoologist, Dr Piper Ross, is on duty as a volunteer. Harry Jewell recognizes that the animal is a tiger quoll, once common in these parts, but now on the verge of extinction. The quoll dies, but the two of them are bonded by their attempt to save its life.

A week after the quoll incident, Harry Jewell shows up at the CAPE Institute, where he meets with the director, Heather Dixon-Brown. He slaps two million dollars on the table and says that he wants to fund a research project to save the tiger quoll. However, there is a complication. Harry is the Managing Director of Powerhouse Mining. He has a license to explore the Otways for brown coal.

Meanwhile Heather Dixon-Brown’s brother, Andy is facing his own crisis of mortality. Getting into bed with Big Coal and letting Powerhouse mine the forest, will happen over his dead body.

This is a play about passion, ethics and what it means to live with the shadow of death (our own and other species). Does it matter if the tiger quoll’s days are numbered? Perhaps extinction is just part of the cycle of life or is human intervention necessary? No one in this play is wicked. No one is entirely virtuous. What unites them all is the one urgent question, in the age of global warming, how are we to live?