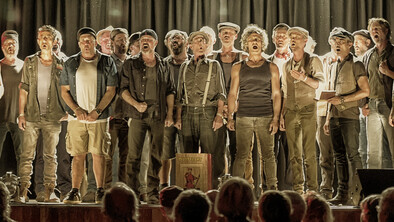 As featured on ABC TV’s Australian Story, don’t miss the debut concert tour of the choir dubbed the ‘Most Handsome Russian Male Choir to be seen in the Southern Hemisphere’.

When 28 bearded blokes from the Northern Rivers coastal community of Mullumbimby came together to share beers and sing Russian songs, something extraordinary – and frankly bizarre – happened, and Dustyesky was born.

None of them have a connection to Russia or even speak the language, yet Dustyesky has gained global notoriety, and stardom in the motherland, for their spirited renditions of Red Army and traditional Russian folk songs.

The Dustyesky repertoire features the unforgettable ‘State Anthem of the Russian Federation’, alongside such classics as ‘Orchy Chornye’, ‘The Red Army is the Strongest’ and ‘Kalinka’, amidst lesser-known, no less breathtaking show-stoppers.

The secret of Dustyesky is lost in the misty undergrowth of the famous Mullumgrad hinterland. Like the recipe for gherkin liqueur, the magic of our music lies in the heart of all of us, but never one man alone. As rough as a sawmiller’s beard yet as gentle as his touch, Dustyesky is elusive yet eternal. Like the wind of the Siberian steppes, we shall blow within you forever. Your heart will soar. You will smile and cry for sure.

‘As rough as a sawmiller’s beard as gentle as his touch, Dustyesky is elusive yet eternal.’ Anton Chekov