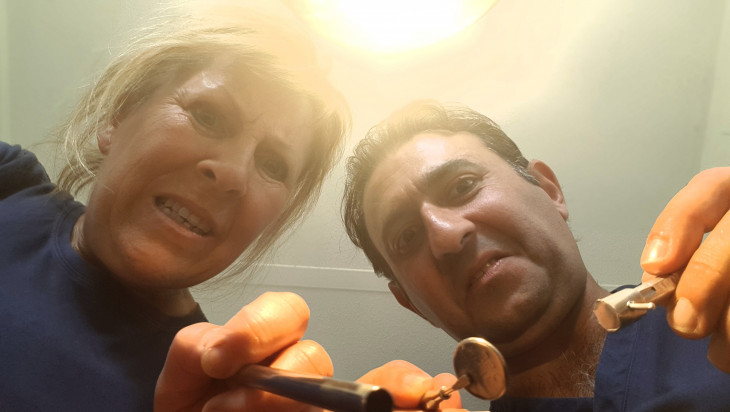 Don’t Trust me, I’m a Dentist

An event every week that begins at 7:00 pm on Friday and Saturday, repeating until April 18, 2021

Don’t Trust me, I’m a Dentist is a one-act two-hander play, based on true life experiences of (occasionally mad) actor-writer Amir Rahimzadeh, who in his former life was a dentist. Co-written and produced by (sporadically kooky) character comic Sharon Heywood, they take you on a turbulent ride as Dr Ronnie Ramirez and his long suffering nurse Yvette, whilst also recreating many “interesting” patients and some other poor buggers along the way.

The narrative explores how a once hungry professional becomes disillusioned and unstable during his career as he battles his demons and endures much more than he can take.

What really happens behind the surgery doors? Do you actually know what your dentist is thinking when you’re at the mercy of his sharp instruments?

This sketch-style comedy is directed by Aussie stage and TV legend Roz Hammond who has an impressive track record as a performer and director at Melbourne International Comedy Festival.

Iranian-born Amir is known for his regular role of Hamid in the acclaimed ABC series The Heights. Sharon has written sketch comedy for BBC Radio and UK’s ITV and was one of the finalists in Manchester XFM Comedian of the Year 2016. Previously the husband and wife team have co-written and performed several comedies in their native UK, including the multi-media sketch shows Perverted Moves in the Dark.

Director Roz Hammond has an extensive back catalogue at Melbourne International Comedy Festival, performing in six previous Festivals as well as directing Footy Chicks and These Things Happen. On television, she is known for The Heights, Shaun Micallef’s Mad As Hell, Five Bedrooms, The Librarians, Skithouse and Jack Irish as well as having several writing credits.

Don’t Trust me, I’m a Dentist was first performed in Melbourne’s Butterfly Club in 2017 and was due for a four-week run at the 2020 Melbourne International Comedy Festival before COVID-19 shat on the idea and pushed the production back to 2021.