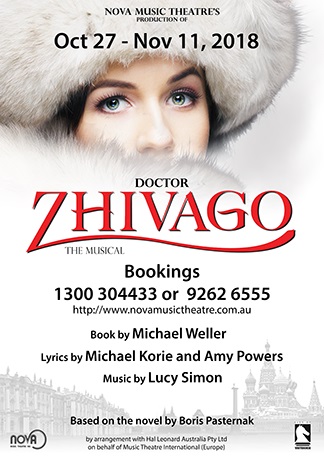 An event every week that begins at 8:00 pm on Thursday, Friday and Saturday, repeating until November 10, 2018

An event every week that begins at 2:00 pm on Sunday and Saturday, repeating until November 11, 2018

Based on the Nobel Prize-winning novel by Boris Pasternak, Doctor Zhivago is a heartbreaking epic romance, following the search for love during the final days of Czarist Russia.

Raised as an aristocrat, Yurii Andreyevich Zhivago is a political idealist, physician, and poet whose life is tossed by the tides of history as he is torn between a life with his close childhood friend and wife, and the passionate and mysterious Lara Guishar. Zhivago, however, is not alone in his yearnings for Lara, and must compete with both revolutionaries and aristocracy alike to win the heart of the woman he cannot live without.

In 1965 Doctor Zhivago hit the big screen as an epic, drama romance by David Lean and created a star of Omar Sharif in the title role. The Academy Award-winning film remained popular for decades, and as of 2010 was the eighth highest grossing film of all time. The musical originally premiered as Zhivago in 2006 at the La Jolla Playhouse in San Diego, California with the Australian Premiere in 2011 as Doctor Zhivago – A New Musical at the Lyric Theatre, Sydney.