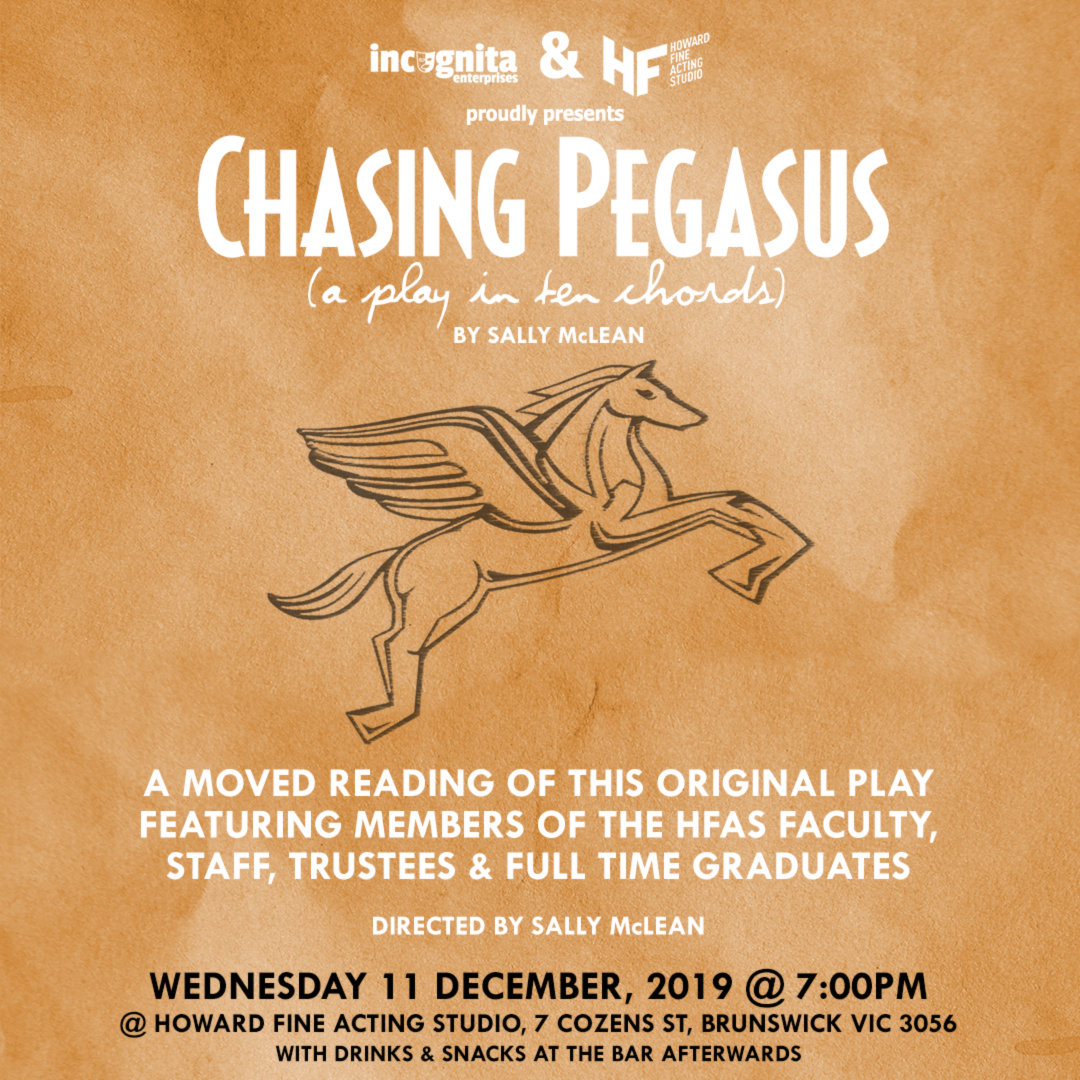 Written and directed by Sally McLean, this critically acclaimed play, set in Melbourne, returns to the stage for one night only as a staged reading featuring the faculty, staff & alumni of Howard Fine Acting Studio Australia.

A housewife, two teenagers, a school teacher, a singer, a deaf girl, an accountant, a book shop owner and a shop assistant. What do these people have in common? They are all members of the Serendipity Book Club and they are all about to embark on an unexpected journey …

A celebration of what makes us different, and through that discovery, a recognition of what makes us ultimately the same, “Chasing Pegasus (a play in ten chords)” focuses not on accepting our place in the world, but rather on the continuing quest of humankind to become more than the sum of our parts.

“… engaging … insightful … if you’re in the mood for some dramatic theatre with interesting characters, inspiring stories and a feel-good, uplifting message, Chasing Pegasus provides an ultimately engaging hour of theatre.” – 3RRR

“… confronting, thought provoking and engaging … this play is an experience that shouldn’t be missed.” – THEATRE ALIVE

On Wednesday, December 11, 2019, “Chasing Pegasus (a play in ten chords)” will be making a one-night only return to the stage, produced in conjunction with Howard Fine Acting Studio Australia, as part of a new series of staged readings showcasing the actors who make up the community at HFAS Australia.

All monies raised at this event go towards the continuing upkeep of The Studio space and all performers and crew are donating their time and expertise.

ABOUT INCOGNITA ENTERPRISES
Incognita Enterprises is an independent producer of award-winning, innovative and original theatre, television and film, based in Melbourne, Victoria, Australia.

ABOUT HOWARD FINE ACTING STUDIO AUSTRALIA
Situated on the edge of Melbourne’s vibrant CBD, The Howard Fine Acting Studio Australia was founded after an overwhelming response to Howard Fine’s first ever Australian Master Classes in June 2011.

As a provider of yearlong, term-long, and intensive classes, the Howard Fine Acting Studio Australia has had a significant impact on the performance landscape of Australia and has led the way in providing Australian actors with world-class, technique-driven training.

At any one time, for ten months of the year, the Howard Fine Acting Studio Australia hosts a minimum of one member of the LA based faculty, providing Australian actors with access to the award-winning techniques created and refined at the Los Angeles Studio.