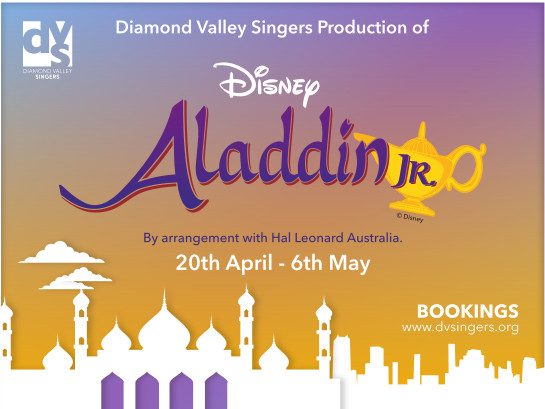 An event every week that begins at 1:00 pm on Sunday and Saturday, repeating until May 6, 2018

Music by: Alan Menken: Lyrics by: Howard Ashman and Tim Rice; Book Adapted and Additional Lyrics by: Jim Luigs: Music Adapted and Arranged by: Bryan Louiselle, Based on the Screenplay by Ron Clements and John Musker; Ted Elliot and Terry Rossio

Welcome to Agrabah, City of Enchantment, where every beggar has a story and every camel has a tail! The narrators enter to set the scene.

At the palace gates, townspeople eagerly await the arrival of the royal family — for at long last, today is the day they will learn who Princess Jasmine’s future husband will be! Among the “red carpet”-like atmosphere, we catch a glimpse of our hero, Aladdin, as well as the nefarious Grand Vizier, Jafar, and his conniving parrot, Iago.

Ah! Here comes the royal family! The Sultan begins to parade his perspective princes for his daughter, Jasmine, much to the crowd’s delight. Jasmine tells her father that she doesn’t want to marry any of these men. She wants to be the one deciding who she marries and when. The Sultan reminds her that the “law is the law,” and the law says she must marry a prince…by tomorrow.