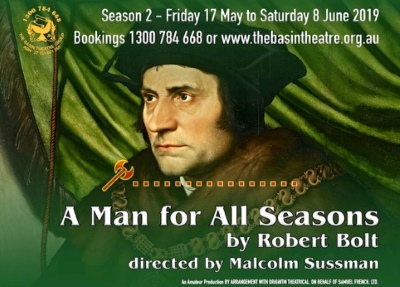 A Man for All Seasons

An event every week that begins at 8:00 pm on Thursday, Friday and Saturday, repeating until June 8, 2019

When statesmen abandon their own private conscience they lead their country on a short road to chaos.

Bolt’s version of the events leading up to Sir Thomas More’s execution for high treason makes for a compelling evening of theatre.  The heavy themes are leavened by the presence of the Common Man who offers a sardonic commentary on the weighty affairs of state being conducted around him.

More, who held the highest office in England as Lord Chancellor, resisted massive political pressure in making a stand for the principles that he believed defined him as a human being.  The struggle between More’s conscience and loyalty to a King, desperate to legitimise the annulment of his marriage to Catherine of Aragon, is at the heart of the play.

Nowadays, when politicians globally are held in contempt for their lack of moral scruples, Sir Thomas More, half a millennium before our time, stands as a beacon of light – A man for all season